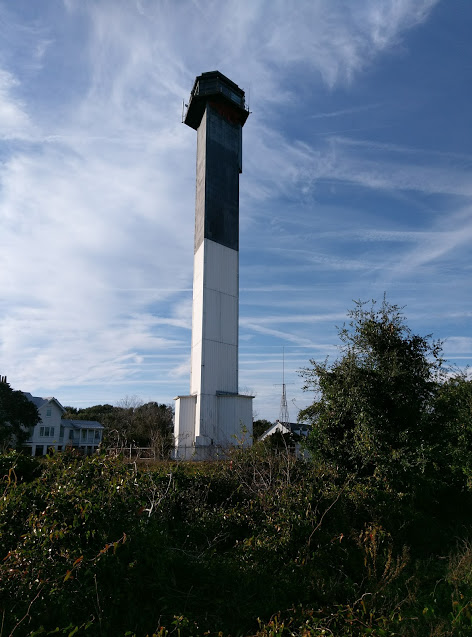 Whenever I have the opportunity, I visit a lighthouse. It’s in my blood. My great-great-grandfather, Charles Greene Crane, was a member of the U.S. Lifesaving Service, the forerunner of the Coast Guard. He and his crew stood watch over the sea at Harvey Cedars, on Long Beach Island, New Jersey.  We grew up hearing stories of heroic men in barrel-shaped vests of cork, braving high seas in open rowboats. Here’s our favorite:

It was 1879, on a winter’s dawn, with freezing rain blowing nearly horizontal. The night watchman at Harvey Cedars alerted the sleeping crew with shouts. He had just spotted a schooner, several hundred yards from shore, foundering on the reef.

The men threw on their clothes and life vests, and hauled the heavy surf boat down to the water. They could see the schooner was listing badly, and her sails were furled. Dark shapes up in the masts appeared to be sailors trying to escape the waves crashing over her deck. The crew’s first two attempts to reach the ship were dashed by a strong current that carried them back to the beach.  Launching further north, they made it past the breakers and rowed hard for the wreck. Along the way, they watched as one sailor after another succumbed to the freezing wind and fell into the sea.  By the time they reached the schooner and boarded her, there appeared to be no one left.

After searching in vain for survivors, they were climbing back into the surf boat when my great-great-grandfather spotted a small bundle tied up in the rigging. He climbed up and discovered a baby, wrapped in heavy woolen blankets, lashed tight to the mast. She was alive. He cut the ropes, climbed down with her, and cradled her tight as the crew made their way back through the waves.

The story got fuzzy at that point. None of the storytellers seemed to know what had happened to the baby, or who she was. Some said she was cared for by a local family, some said she was adopted by someone far away.  It was a most disappointing ending to such a great story.

Then one day, an uncle arrived with another chapter. His mother had recently told him she was sitting on her front porch, when a black limousine pulled up. A chauffeur stepped out, came around the car, and opened the door for a very elegant, well dressed woman.  The woman approached the porch, and told Aunt Edna she was looking for the family of Charles Greene Crane.

“He’s long gone, but I’m his daughter,” said Edna, “Why are you looking for him?”

The woman said she had grown up hearing that Mr. Crane rescued her from a sinking ship when she was an infant, and she had always wanted to find him and thank him.

“I’ve heard that story all my life!” Edna exclaimed, “And I’ve got the blanket and the rope hanging in the cellarway!”

Edna retrieved the blanket and rope, and gave them to the woman.

On hearing this news, my uncle became excited. “Who was she? What was her name? Where did she live?”

As it turns out there’s actually quite a bit more to the story, but I was left with the above ending for years, so I’ll leave you there today.

Speaking of dissatisfaction, the lighthouse at Sullivan’s Island, South Carolina (pictured above) is the least attractive one I’ve ever seen.  A triangle sheathed in steel, it was originally painted bright orange. The neighborhood eventually talked the Coast Guard into making it less offensive by painting it grey and white, but that didn’t help much.

I believe that “we are all one”. I believe there is no such thing as “supernatural”, only “natural”. I believe I’m always telling the truth, but not the whole truth.